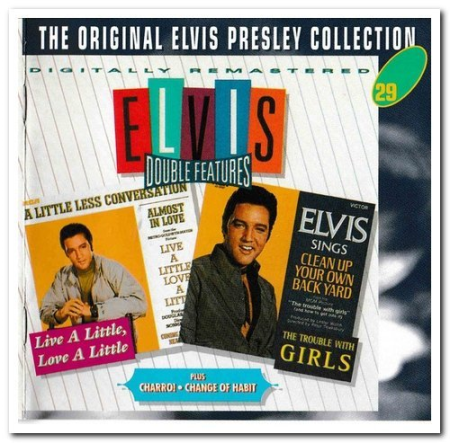 ​
When dealing with the music from Elvis' late-'60s movies, it's easy to feel like a diver trying to get at some treasure hidden under a very deep stretch of ocean; in effect, you've got to go down very far, maybe almost deeper, and at the expense of more effort than the potential rewards would seem to justify, in order to find anything of value. This CD packages the music from Presley's final four films of the '60s, a point at which audiences were staying away from his pictures in droves and the musical content was so attenuated that they didn't even merit individual soundtrack releases. He was so far from his rock & roll roots by this that a good deal of the music bears no relationship to rock at all, and certain tracks here, such as "Signs of the Zodiak," are exclusively the interest of obsessive completists. On the other hand, Presley was still such a good and charismatic singer that a surprising amount of what is here -- considering its dire reputation -- is worth hearing and even owning. Even on sugary, upbeat pop numbers such as "Wonderful World" (from Live a Little, Love a Little) and "Have a Happy" and "Change of Habit" (from Change of Habit), Presley imbues enough passion and intensity to make them worth hearing; he might've had problems with his repertory or understanding what audiences wanted from him at that point in his career, but he was never dull and seldom less than exciting. He does depart significantly from rock music at s in these scores, most notably on "Almost" from The Trouble With Girls and "Almost in Love" from Live a Little, Love a Little; on the latter, Elvis comes as close to emulating Frank Sinatra stylistically as he ever got, and he pulls it off. And the rock content here isn't to be overlooked either -- Elvis' one foray into quasi-psychedelia, "Edge of Reality" (from Live a Little, Love a Little), wasn't entirely successful, mostly because of an arrangement that makes it sound like the theme from The Mod Squad, but it is a fascinating oddity and does offer a bracing performance by the King; this disc also offers two different takes of the one true (albeit semi-precious) jewel out of that same film, "A Little Less Conversation," which was a good rocker in the context of any period of Elvis' career. Similarly, "Clean up Your Own Backyard," from The Trouble With Girls, shows the excitement that Elvis could still generate and appears in two different versions, one with dubbed-on horns and the sig of the Blossoms (featuring Darlene Love) and one featuring just Elvis and the core band, including some upfront bluesy guitar. "Charro!," from the movie of the same name, is interesting as a failed attempt to place Elvis' voice in a pseudo-Ennio Morricone setting (actually, the authors and arrangers don't seem to know if they were trying to emulate Morricone or John Barry), while the accompanying "Let's Forget About the Stars" is a pleasant and intense ballad performance by Presley. The last five tracks on this disc come from Change of Habit, and it's interesting to note the influence of works such as Hair (whose cast album, also on RCA, had sold considerably better than most of Presley's work in 1968 and 1969) on the scoring of this movie. The similarity between "Let's Be Friends" and the Frank Sinatra/Nancy Sinatra showcase tune "Somethin' Stupid" is hard to ignore, but Presley still makes it interesting enough to enjoy. And listeners even get a couple of rders of Presley's interest in gospel music in the form of "Let Us Pray" (in addition to "Swing Down, Sweet Chariot" from The Trouble With Girls). The overall material is better than it's usually made out to be, and some of what's here is quite good; this isn't the place to start listening to Elvis Presley, or even an ideal seventh or eighth Elvis disc to buy, but it's a fascinating addendum to the 1968 comeback special and the Memphis sides that followed and several of the songs are enjoyable in their own right.