A Holocaust survivor has claimed that photos showing the liberation of Auschwitz aren't real, because none were taken at the Nazi-occupied concentration camp.

Anne Frank's step-sister Eva Schloss, 90, who was sent to the notorious camp in Nazi-occupied Poland at the age of 15, appeared on Good Morning Britain today to discuss the 75th anniversary of its liberation.

Eva was 23-years-old when her mother Fritzi married Otto Frank, making her the posthumous stepsister to Anne Frank, who had died eight years earlier in the Bergen-Belsen concentration camp in 1945.

She spent eight months at Auschwitz before the camp was liberated, and avoided being taken on a death march by the Nazis who fled with prisoners to try to cover up their crimes, because she and her mother overslept and were left behind.

However, the survivor has alleged that pictures of Soviet Red Army liberating the camp are fake, because Russian soldiers hadn't brought cameras, and says there was a heavy snowfall at Auschwitz at the time, which isn't shown in pictures.

She claimed that the photos, which apparently show the liberation, were in fact taken at other camps, but she didn't give an explain her theory further in the interview.

She said: 'It wasn't just Auschwitz , they liberated all the camps in [Nazi-occupied] Poland and that is really not known.

'Another thing I wanted to point out, there are many pictures about the Russians liberating Auschwitz and there's never any snow.

'The snow was honestly that high, I was at the Russian embassy once and I said "Something puzzles me, those photos are fake".

'They said, "Well yes, they are not fakes", but when the army came they didn't have cameras they didn't take photographs.

'Only much later they took pictures, you see now, but this is definitely not in Auschwitz and not the liberation of Auschwitz.'

Eva told of her horrific experience in the camp, detaining the inhumane conditions of the Nazi-occupied camp, and telling how she would wake up to dead bodies in her shared bunk.

She said: 'This was an enormous area of concentration camps. There were tens of thousands of people in inhumane conditions, without food or clothing.

'With illnesses and lice, no toilets no drinking water, working in the hot summer the big snow, you slept in a bunk with eight people.'

She added how it was 'very awful' in the morning to find the person to you hadn't woken up, and you'd 'spent half the night next to a dead body'.

Like the Frank family, Eva and her family were discovered hiding in Amsterdam, arrested by Nazi soldiers and sent to a concentration camp when Eva was just 15.

Eva and her mother survived the notorious Auschwitz camp, however her father and brother didn't.

On their return to Amsterdam Fritzi fell in love with Otto Frank, the only member of the Frank family to survive the Holocaust, and they married in 1953.

She told of how she had originally thought her mother had been sent to her death after being selected to be gassed, and was forced to tell her father the news.

' My mother was actually selected to be gassed,' told Eva.

'We had to parade naked and if they thought you were too thin, you couldn't work anymore, you went to the wrong side.

'I thought I had lost her but again a miracle, she was not lost.'

When asked how she survived the horrific camp, Eva told how she simply felt too young to die, and wanted to go on and 'get married and have a family' - but says it was 'miracles' that saved her.

She said: 'For me it was when I was arrested on my 15th birthday, I didn't want to die, who wants to die when they're young?

'We had a beautiful life in Vienna, I wanted to get married and have a family so I never gave up.

'Never the less, without a miracle I wouldn't be here, little things that saved your life in some kind of ways.' 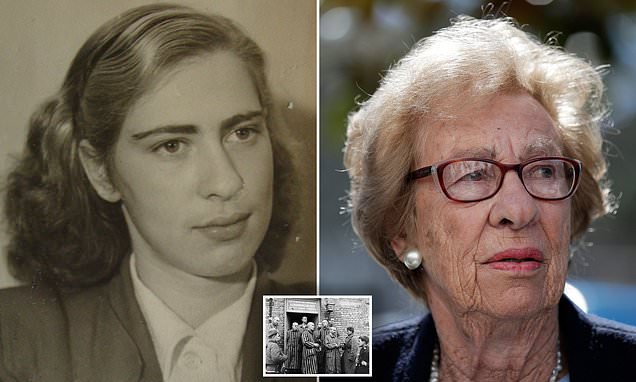 Anne Frank's step-sister Eva Schloss, 90, claimed on Good Morning Britain that photos showing the liberation of Auschwitz in Poland aren't real, because none were taken at the concentration camp.